OUR WEST SPRINGFIELD BRANCH OFFICE HAS MOVED TO 85 ELM STREET. THE ENTRANCE WILL TEMPORARILY BE LOCATED ON CENTRAL STREET. 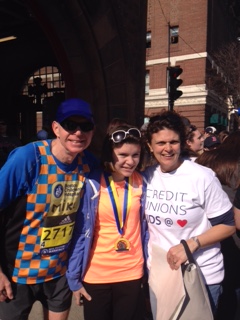 Holyoke, MA - On Monday, April 18, 2016, Holyoke Credit Union’s President and CEO, Michael Murphy, will be running the prestigious Boston Marathon for the first time as a member of the Credit Unions Kids @ Heart Team. Each team member has a patient partner they represent during the race. Murphy’s patient partner is 13-year old Abby Bertiaume from Holland, MA, for many years she has been battling Moyamoya, a rare brain disease. Murphy’s goal was to raise $12,500 for Abby. To date, Murphy and Abby have raised over $16,500, far exceeding their original goal.

An experienced marathon runner, Murphy said, “I've been blessed with good health and I was born to run. I'm honored and thrilled to run in the 2016 Boston Marathon as a member of the Credit Unions Kids @ Heart Team for my patient partner Abby, and Boston Children's Hospital. Holyoke Credit Union supports this great cause because we believe in all the extraordinary things that Boston Children's Hospital does for kids.”

Abby, who lives a normal teenage life dancing and spending time with friends and family met Murphy through the Credit Unions Kids @ Heart Team. The onset of Abby's Moyamoya was sudden. Abby appeared to be suffering from a stroke and had difficulty moving her hands and arms. Abby's parents brought her immediately to her primary care physician, who quickly recognized the gravity of the situation and directed them to Boston Children's Hospital.

Moyamoya disease affects 1 in 120,000 children and constricts certain blood vessels in the brain preventing the flow of blood and vital nutrients. Without intensive medical treatment, a stroke is imminent. At the world renowned Boston Children's Hospital, Abby underwent extensive brain surgery by Dr. Edward Smith and his staff, who are on the forefront of treating this rare and debilitating childhood disease. The surgery cleared the blood vessel blockage and essentially created new blood vessels for Abby's brain. Progress in the treatment of diseases like Moyamoya would be impossible without the type of research and intensive patient care performed by Dr. Smith and his team.

Murphy looks forward to running in the Boston Marathon this year representing Holyoke Credit Union. He is thankful to the many people and organizations that have supported his run. “My running is easy because I’m continuously inspired by the courage and resiliency of my patient partner, Abby, and all the other kids afflicted with such devastating diseases like Moyamoya,” said Murphy.

Holyoke Credit Union was organized in 1911 as a Massachusetts state-charted credit union to deliver a full range of consumer banking services. Today, they are chartered by the Commonwealth of Massachusetts and regulated by the Massachusetts Division of Banks.  Throughout their 100-plus year history, they have been a financially strong and professionally managed credit union, making them a wise and prudent choice for those looking for stability and peace of mind. Membership in the Holyoke Credit Union is available to anyone who lives or works in Hampden or Hampshire Counties in Massachusetts.

Photo Caption: Mike Murphy, President and CEO of Holyoke Credit Union after the 2016 Boston Marathon with his patient partner, Abby Berthiaume and her mother, Angela Berthiaume.